There are many misconceptions about both personality and leadership.  Poorly interpreted psychometric questionnaires are claimed to tell us what we are good at.  They do not.  Leadership is often said to defy personality analysis.  It does not.  The latest evidence is that personality does indeed predict who tends to become leaders and also how effective they will be but these are population level predictions: they are hard to apply to an individual.  Indeed, I want to argue here that individual leaders will almost inevitably be incomplete requiring the contributions of others to complement their strengths with different strengths that are also required.

How do personality and leadership capabilities interact?  I propose that they are orthogonal and best described in a 2x2 ,matrix as in this diagram.  Personality is not a determinant of what we are good at but it does set up a pattern of helping and hindering factors.  Take the example of planning and organising, a key element in leadership.  This is a capability that some are distinctly better at than others.  The personality characteristic of Conscientiousness is a help since conscientious people tend to be disciplined, orderly and reliable, taking their responsibilities seriously.  Thus, if anyone is conscientious AND also good at planning and organising, I want to suggest we regard this as a NATURAL strength since it is working consistently with the influence of conscientiousness in the personality. 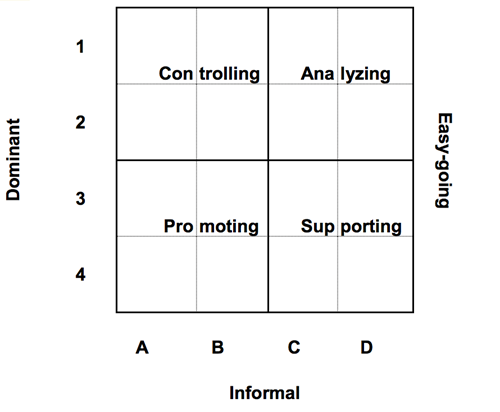 Then there are those people who are neither conscientious nor good at planning and organising.  This is a RESISTANT LIMITATION.  The mistake frequently made here is to encourage such people to work on their organisation and yet there may be a better solution: to work around it.  There are many possible work around solutions but the most effective is frequently to ask someone else to lead in this area where they are naturally strong and you are not.  Thus one is seeking a complementary leadership contribution in this area: each playing to his or her strengths and complementing one another.

I have proposed elsewhere that leadership comprises activity in three domains: the strategic, the operational and the interpersonal.  The illustration of planning and organising relates equally to all aspects of leadership.  Complete leadership is more likely to come from several people acting together as a complementary team than from one individual acting alone, and those of us involved in leader development would do well to acknowledge and work with this notion rather than seek to lay the false hope of complete leadership on incomplete individuals.

Dr David Pendleton is a psychologist.  He is Co-Course Director of the High Performance Leadership Programme at the Said Business School where he is an Associate Fellow and is also Chairman of the Edgecumbe Group in Bristol. If you are interested in these ideas and want to read more about them, visit http://www.edgecumbe.com or consider attending the High Performance Leadership Programme at Oxford University’s Said Business School where these ideas are taught.  He is currently writing a book about leadership with Prof Adrian Furnham of UCL. The book is going to be called ‘We don’t need another hero’ and will be published in 2011

The Saïd Business School is Europe’s fastest growing business school. An integral part of the University of Oxford, it embodies the academic rigour and forward thinking that has made Oxford a world leader in education.