How to unleash new ideas, creativity and innovation to create your company’s future

By downloading this resource your information will be shared with its authors. Full privacy statement.
Among the plethora of books on innovation and creativity in business this one stands out, both in the ideas it conveys—from the evolution of imagination to the application of AI— and in its lively and entertaining presentation.

Authors Martin Reeves and Jack Fuller, of the Boston Consulting Group, consider how successful corporations have been able to radically improve our lives—in healthcare, agriculture, finance, consumer goods, communication, entertainment, and more—and how this has been achieved by harnessing the inimitable human capacity of imagination within a corporate context. 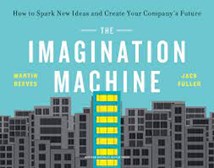 In our fast-changing business world, where competitive advantage is increasingly short-lived, where organizations must constantly rethink their strategies and find new opportunities and new ideas, imagination is critical. Unfortunately, too many companies have lost the ability to imagine or at least to harness the imagination of their people. Using numerous examples from industry and drawing on insights from neuroscience, computer science, philosophy, and psychology, Reeves and Fuller offer an accessible description of the workings of human imagination and a guide to how to create the corporate machinery able to exploit imaginative ideas—to create an Imagination Machine.

The business cycle, from company birth through success to eventual demise, is so often a story of dynamic entrepreneurial start-up guided by imagination, moving through a phase of successful well-tuned operation, to a stagnant maturity. Although a vibrant start-up sector is vital, our economies are principally dominated by large established corporations. It is only by these mature companies breaking the cycle and finding their imaginative drive that economies will thrive, and the business community will be able to help solve the multiple problems the world now faces.

The book starts with an examination of the psychological basis and the dynamics of imagination, tracing its evolution and dispelling many misconceptions—it’s not purely mental, doesn’t happen in a flash, it isn’t always just the effort of one individual, etc. It then moves on to discuss what inspires imagination—the need to stimulate curiosity and rethink our mental models. It then looks at how ideas originate through surprise and how through iteration and collision with reality they can evolve—how an idea taken from the mind out to the real world and back again can establish a feedback loop that spurs the imagining brain further. While examining these processes the authors also reveal the many barriers and obstacles that can hold back or stifle imagination.

The ability to spread a developing mental model from one individual brain to others, the facility for collective imagination, is central to the creation of imaginative organizations. Discussing this the authors highlight the importance of communication—specifically the skill of communicating ideas about things that are yet to exist—and explain the need for collective teams to focus, move, and probe the world together. From this collective source then comes the need to spread the imagined new idea or developing mental model out beyond its pioneers. This requires codification so that the idea can be realized and replicated—to move from concept to reality. The book also describes the barriers to the evolution of ideas in organizations and how to avoid them.

In a final section, the authors look at the new reality coming to us with the growing use of AI in business. While AI can perform routine cognitive tasks to aid and augment imagination, we tend not to believe that machines have imagination. With the coming of quantum computing this belief may yet be shaken, but for now machines are a long way from acquiring key characteristics that are fundamental to imagination. As the authors conclude, “without a causal model, connection to perception and action, or any aspirations or frustrations other than those given to them by people, AI will not be replacing human imagination any time soon.”