Trump Vs Hillary: A Neuroscience View

If a week is a long time in politics, what will the remaining four bring before the Presidential election results of November 8th are known? For students of human behaviour, which all leaders inevitably are, the greatest soap opera and reality show on earth is coming towards its end. It’s a zero sum game.

In March 2016, before Super Tuesday had started the process of winnowing out the many contenders for nomination – who now remembers what Jeb Bush ever said? - in a previous article I predicted that Donald Trump would become President. Now that there is just a two-horse race, how does that prediction of seven months ago hold up? And what additionally might applied neuroscience tell us of the present state of play and its outcome?

An interim article piece in May looked at how the two candidates measured up on being trusted. That predicted that Trump would beat Hillary Clinton hands down. What now?

Applied neuroscience is not the only way of looking at human behaviour, of course. There are older and competing models. A piece by Jesse Singal reported in Science of Us on 7 October and headed The Science of Donald Trump’s Thin, Thin Skin speculated on whether Trump has narcissistic personality disorder.  Roughly described, and referring back to the Greek legend of Narcissus fatally admiring his own reflection in a pool, it typifies a person (usually male) whose essential fascination is himself.

The article had thought contributions from two psychologists observing that there might be two types of the supposed disorder. In the first, a person makes grandiose claims. In all sorts of ways, he states that he is even more wonderful than might have been imagined. In the second, he appears to be remarkably sensitive to others’ opinions and views and then bullies them into submission. The observation of the article was that Donald Trump appears to exhibit both states.

This is of course not really science. Of dubious diagnostic value, it is an interesting description with some literary merit and the capacity to create an oddly satisfying pigeon-holing category. What might have been an especially interesting comparison would have been to try and type Hillary Clinton also by the same descriptive method and then see what the implications of both were for the presidential outcome.

Observations on one candidate about a thin skin do not, alas, tell us who might be the winner. In any event there is not much data to be had about the thickness of skins with regard to the winning of Presidential elections. It might nevertheless be an amusing dinner-table conversation to speculate on previous presidential incumbents’ epidermal characteristics. Both Nixon and Johnson were perhaps on the thin side, Carter a little bit thicker, and the Bush presidents, major and minor, thicker still. But it is doubtful if there would be predictive value in such a game.

Another way for a leader intrigued by understanding behaviour is to look at the traditions of humanism. The particular province of humanism is the special place it gives to the value of individual experience and feelings. In Homo Deus: a brief history of tomorrow, author Yuva Noah Harari has recently delineated three kinds of humanism. Each of the categories has strongly definable differences in behaviour that come from those underlying beliefs that are the social genes of any culture called the memes.

From this point of view, the two candidates are showing completely different cultural positions. Hillary Clinton’s is part of the liberal humanist agenda. Trump’s (like Putin’s) is part of the evolutionary humanist agenda. Obama’s, for interest, has been socialist. It may well be that Trump’s agenda chimes very well with the unexpressed dissatisfactions of those large swathes of the American population that the main parties seem not to have previously recognized. Vulgar and brash by European standards though it may be, Donald Trump’s style, manner and expression has many more echoes in it of the fulfillment of the American dream than does Hillary Clinton’s. On this basis, Trump will become President.

There is, however, one fascinating balance of similarity that the polls record for both presidential hopefuls: and that is that they are both disliked. At the end of August 2016 the New York Times reported the following polling data: 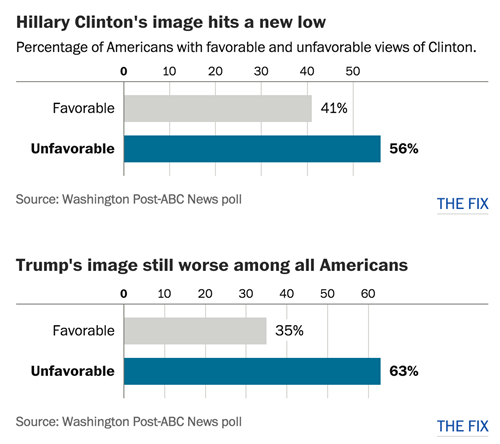 What are the implications of that?

If, as is now generally accepted, all behaviour has underneath it a complex neurochemistry and that we are fundamentally driven by the electro-chemistry of our e-motions, how would a common dislike translate into voter action? Would the least disliked win? Probably not. It’s more complicated than that.

Behaviour is underpinned by the emotions being organized around the way the nervous system works for escape/avoidance/survival on the one hand and attachment on the other. Fear, anger, disgust, shame and sadness characterize the first category. Excitement/joy and trust/love characterize the second.

Looking at a great deal of press comment and video clips as a way of resolving the dislike dilemma, it might be a useful sense-making aphorism to observe that the American people hate to love Hillary but love to hate Trump.

If that thought creates a little moment of interested surprise that is the best test that it has some truth in it. A new integration of brain cells will have happened, resolving itself in an attractive novelty that then becomes a newly-established fact.

Behaviourally, of course, hate will not produce votes for, but is a powerful source of votes against. In consequence those who hate Hillary will vote for Trump if they vote at all: though the dislike factor might occasion a very low voter turnout. Love, on the other hand, being the great attachment emotion, is a powerful spur to action and source of votes; and, it might be argued, in a voting booth loving to hate creates a surprising brief thrill of daring. If that is indeed the case, then again Trump wins and the turnout will be surprisingly large.

There will shortly be a resolution to the present state of uncertainty when the votes are counted. Perhaps the greatest virtue even of decaying democracies is that elections do produce known outcomes. But what might happen between now and then? The fear of a lone gunman must be a nightmare for the security services. And the possibility cannot be ruled out that Trump destroys himself by one means or another. He has a history of testing himself out on very high wires, though an invisible safety net always seems to have been magically in place.

What alas is unlikely to happen is that Hillary learns to laugh at Trump and gets others laughing with her. That would change the nature of the debate.

Trump’s chosen battleground seems to be to create a slugging match. Unfortunately, Hillary’s advisers seem to think she might counter-punch effectively. But they have not taken into account that there is no social system – perhaps none anywhere in the world – that values a women counter-punching in public unless it is such a killer blow she immediately become a heroine but then is modest about it. Margaret Thatcher developed the first quality but, despite advice, not the second, which led to her downfall.

Nor does it seem that Hillary’s advisers have taken into account that she does everything through thought (the liberal humanist dilemma) whilst Trump does everything through feeling (the evolutionary humanists capacity to draw the crowds). And while feelings inevitably underlie every thought that Hillary has, the millisecond delays in her reactions show everyone else’s brain that she is having to think, for heaven’s sake, while Trump seems to ‘know’ instantly.

As there is nothing to date in Hillary’s counter-punching skills to suggest that she has any effective capacity to floor Trump, her best strategy would be to tease Trump – as the greatest bullfighters do with a bull - to the point where his frontal cortex is so immobilised that he displays his remarkable incapacities and limitations as a world leader to the full.

If Hillary could trigger the Donald’s poorly-regulated Self through a different channel other than slugging she might then display him to the American voters and the bemused world for the limited contender that he is.  But that seems unlikely to happen now.  And in any event it doesn’t deal with Hillary’s long-standing own limitations as a presidential candidate – though it might be enough in the short term to get her into office.

Hult Ashridge’s Guy Lubitsh on why making connections within your organization is so important, and a new model and approach that can help