How teams can tap value lurking outside their awareness

The key to decision-making dilemmas can often exist outside of our conscious awareness. From falling in love to voting to leave the EU we don’t always follow logic to make crucial decisions, instead we rely on direction from our unconscious selves. If something doesn’t feel quite right or the problem seems intractable there may well be an answer, but one outside of our awareness.

In a business context, where people are often reluctant to air illogical thoughts and where 'groupthink' can be a hazard, leaders can find it difficult to go beyond the logical and explore feelings and biases and tap their team’s unconscious.

Based on decades of experience in teaching and developing executives, INSEAD professors Roger Lehman, and Erik van de Loo, provide an invaluable framework for managing decision making and problem solving when traditional, logical, systematic thinking tools are insufficient, and when the solution is invisible, even in broad daylight.

They call this framework ‘Night Vision’, because it can illuminate the dark corners of our awareness where essences of the issue might be lurking. It uses techniques from psychoanalysis based on free association, which encourage expression and exploration of whatever thoughts, images or feelings come to mind when thinking about a problem. 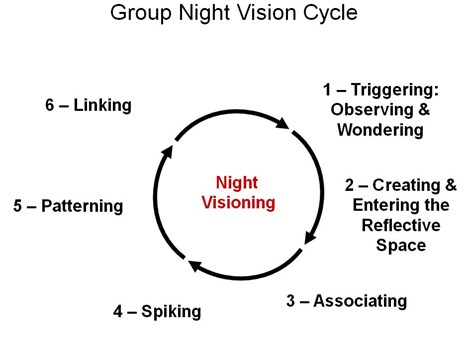 These are the four stages to the Night Vision cycle:

1) Triggering: Observing and Wondering. Having clarified the problem and the decision to be made, the leader suggests the group approach the issue from a different angle, triggered by the realisation that the application of traditional logical problem solving is not sufficient in this case.

2) Creating and Entering the Reflective Space. As they enter the reflective space, the task of the group is to allow all individual associations to be shared in a non-judgmental manner.

3) Associations. The group starts to generate associations - things that come to mind. These may be pictures, scenes from a movie, feelings, memories and all sorts of other associations - only limited by the group’s imagination. These associations can tap into a deeper level of understanding which is often outside of awareness and which can lead to new insights and connections.

During this step it is the leader’s job to maintain and protect the non-judgmental space, allowing all ideas to flow. All associations are put on the table and not debated.

4) Spiking. At this stage specific associations are linked to the issue at hand. The spike is a bridge between the unconscious and the here and now.

In a real world example, the relationships between two merging banks, rather than developing smoothly, were hindered by an air of mistrust. During the Night Vision exercise, a common association that came up was courtship. These banks were struggling with the dating phase and were both nervous about long-term commitment. Both felt the other one might betray them, but this was never openly discussed. One side in particular was aware that the other was still ‘on the market’, looking for another partner. Once this surfaced, both sides were able to acknowledge that they didn’t really belong together and managed to break it off, saving on-going struggles, time and money.

5) Patterning. In the fifth stage, the group identifies patterns in the group’s associations. Similar ones then warrant further investigation. In the bank merger example, the pattern that emerged in the associations was ‘avoiding’, which led the executives involved to identify the issue and to explore solutions.

6) Linking. Finally, the identified patterns form an enlarged space for the team to explore additional options for intervention.

The night vision methodology enables teams to uncover obstacles in their midst and make better decisions based on input that they had not previously been able to consider.

“Night Vision brings another dimension to awareness by incorporating and leveraging the diversity in our own minds, especially our irrational and unconscious wishes and fears.” say Lehman and Van de Loo.

They are both programme directors of the Executive Master in Consulting and Coaching for Change, an executive development degree programme at INSEAD.

As one of the world’s leading and largest graduate business schools, INSEAD brings together people, cultures and ideas from around the world to change lives and to transform organisations.