BRAIN GAIN: The measurement of personality, much favoured by HR, selection centres and all kinds of executive training and development programs, has had remarkably little effect upon the generality of management practices. For the sixty years it has been in active organizational use the everyday utility of this branch of psychometrics has not quite matched its promise.

And yet … There is undoubtedly a widespread social construct in Western organizational thinking that personality is important in all kinds of ways.

Imagine some bright young individual high in Myers-Briggs iNtuion, Feeling and Perceptiveness proposing solutions to a hard-bitten, cynical and over-stressed manager of a complex project that was going wrong. The fantasies of someone better suited to the wilder shores of the marketing department might generate the irritated response: “I need to hear that like I need a hole in the head.”

But holes in the head can be surprisingly useful things to those interested in how the cortical mass that the skull contains actually works.

Modern interest in the brain and personality dates from 1848 when a railway construction worker in the USA, one Phineas Gage, aged twenty-five, was using a tamping iron to ram home an explosive charge preparatory to blasting rocks in a railway cutting. Unhappily his tamping iron caused a wayward spark that triggered an unplanned explosion, sending six feet of iron rod through his left cheek and out of the top of his skull to land many metres away. Extraordinarily he did not lose consciousness and survived for another twenty years.

Photographs of Phineas Gage holding the inscribed steel rod have come to light in recent years, and a reconstruction of the passage of the iron bar has been made. His great contribution to brain science was that, in surviving, his doctors were able to track the consequence of his massive injury. 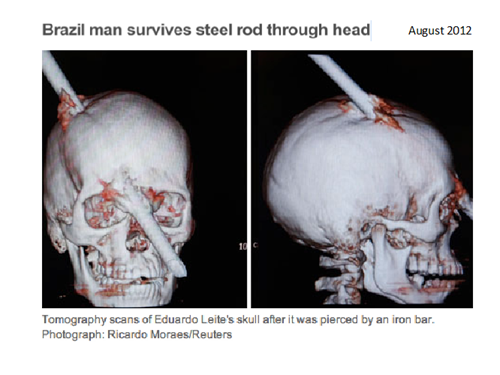 Although he survived physically his personality became seriously impaired. From having been an energetic and upstanding man, husband and foreman he became a drunken ne’er-do-well. From Phineas Gage came nineteenth century scientific interest in the brain and personality. While the precise connections still remain elusive it is clear that the frontal lobes have an integrative effect upon which the structure of personality and systematic thought rely.

In early August, and in an extraordinary repeat of the Phineas Gage experience, a construction worker in Brazil, Eduardo Leite, has had a remarkably similar accident. Though wearing a hard hat an iron bar, dropped from five stories above him, pierced the top of his skull and was deflected forward through his forehead. In his case it stuck there until removed on the operating table. Pictures taken upon his admission to hospital show it in situ.

Five hours of surgery have apparently left Eduardo Leite alive and remarkably well, with the neurosurgical world speculating on what the residual damage is likely to be. Early reports suggest it might be very little. Phineas Gage’s injuries were to the left frontal side of the brain. Eduardo Leite’s are to the right side – a region more concerned with spotting danger, noticing the unfamiliar and tracking emotions than the integrative functions of the left frontal side. Time will tell. But we know that another hole in the head, totally unwanted though it might have been, will contribute to the science of understanding how the brain works and what it really does.

Vanderbilt University’s Shayna Humphrey on how to gain the resilience, composure and self-management needed to lead others effectively through challenging times